Micheal Tome a tireless volunteer is our Unsung Hero for February

Unsung Heroes of Huntington County are

We recognize them for deeds done,

they do not crave this recognition for just

"Doing What they Do" 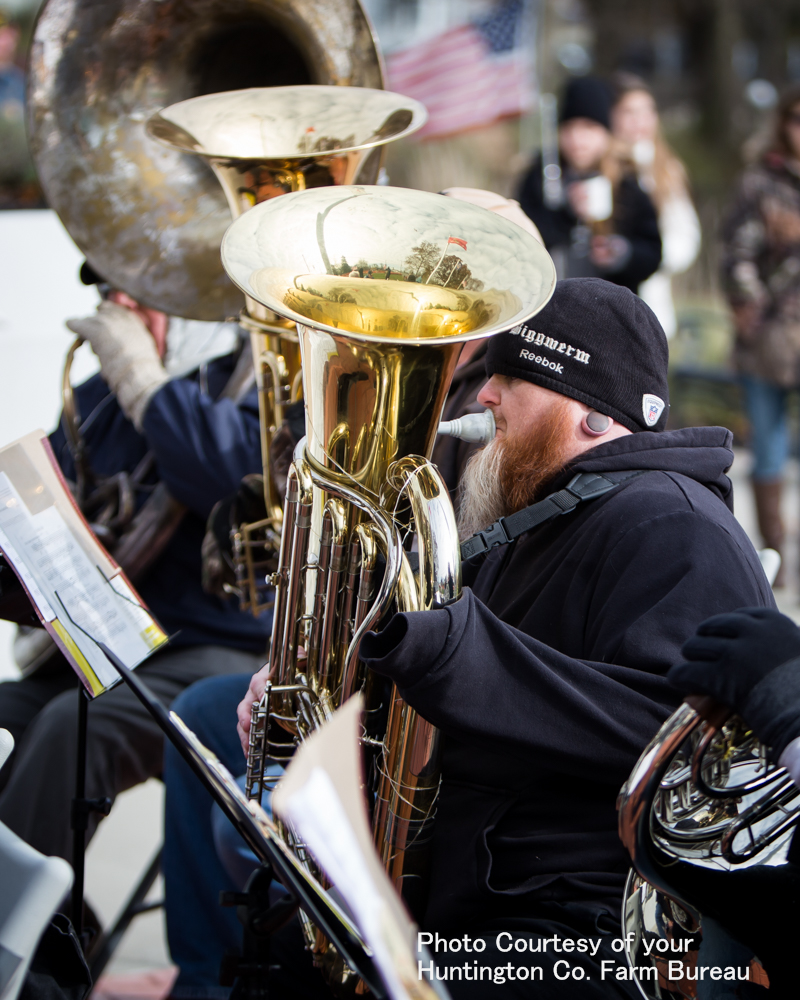 Born in Elgin, Illinois, 41-year-old Michael Tome has called Huntington home since he was a young child.

It was during those formative years that Tome developed his love of music, playing multiple instruments in the Viking band.

A love quickly turned into a fine-tuned talent and Michael was accepted into Boston’s Berklee School of Music in 1997.

Unfortunately, Michael’s stay in Boston would be cut short.

An untimely illness brought Michael home to assist with caring for his ailing mother and while his secondary education took a back seat to the well being of family, the musical light inside of him remained strong.

Michael joined the Erie Band when he was still a student at Crestview and continues to play with the group, performing in both the Erie Brass and Erie Jazz Bands.

He’s also collaborated for the last few years with a handful of local friends, operating as the Lime City Brass Band.

A band that Tome said simply “started as a group of friends who love to play Christmas music”.

Somehow, he also finds time to participate, with approximately twenty other members of the community, in Huntington University’s symphonic band.

Without the aid of Tome and others like him, the university is able to fill seats within the band that would otherwise remain empty, thus giving music students a more fulfilling experience.

Michael’s life isn’t lived in an enclosed bubble of music, though.

He and his girlfriend, Marji, enjoy traveling the Midwest to hike the region’s trails and have spent countless hours in the hills and hollows of Indiana, Kentucky and Michigan’s upper peninsula.

It’s a past time that lends itself to another of Tome’s interests, the search for Sasquatch.

It’s on those hiking travels, including visits to local attractions, such as Salamonie Reservoir’s Lost Bridge area, that Tome likes to “see the clues” of the fabled and revered creature.

If Tome seems like a bit of an adventurous type, it may stem from his family roots.

Michael revealed to us that his existence almost never came to be.

At the height of World War 2, his grandmother was on the path to becoming a nun. In fact, she was just a few short weeks away from entering the nunnery.

It was at that time she met Michael’s grandfather, himself just two weeks from being shipped overseas.

His grandmother changed course and joined the war effort, serving as nurse.

The two pledged to reunite, once peace returned, to continue their romance. It was a rekindling that would become an eternal flame as the two later married and started a family.

Since having children of his own, Tome has done some rekindling of his own.

Growing up, Michael was involved in Boy Scouts. He reached the rank of Life Scout, which is

When his son became interested in scouting, Tome returned, his current position in the Troop 130 Assistant Scoutmaster, and hold numerous other local and district level positions.

While he’s noticed some differences in scouting, mostly the influence in technology and the difficulties it brings in getting kids outside, since his time as a scout, he still helps teach the same valuable skills.

Orienteering, shelter building, fire starting and wilderness survival skills all still reign supreme on the scouting community’s chart of expertise, with Tome happily doing his part to assist young scouts in their quest to become proficient in those fields.

His troop is active in communities’ endeavors, too, such as the river cleanup projects and Haunted Trail.

At 41 years old, Tome has no plans on slowing down, but recognizes the day will eventually come when he may “may not be strong enough” to hold his tuba.

Until then, he’ll continue playing and enjoying time with his children.

His oldest two, Elycia (14) and Vincent (13) are currently members of the Erie Band with their dad. Tome’s youngest, Bianca (11) has also picked up Michael’s love of music and is in the process of deciding which instrument she wants to pursue.

Like any dad, Michael sometimes wishes time could stop in it’s track and keep his children young.

Elycia will graduate form high school in a short four years. She’s shown a substantial interest in a teaching career, but not one of the normal variety.

Similar to the same way her grandparents heard a call and ventured beyond our nation’s borders to answer it, Elycia has her sights set on teaching overseas, in Korea.

Even though Michael admitted that the thought of Elycia even leaving the state worries him to no end, he’ll support whatever career path she and her siblings choose.

That support is a trait that comes naturally and flows easily for Tome.

After all, be it teaching children life skills, cleaning Huntington’s waterways, placing his dreams on hold to care for an ailing parent or enriching the lives of others with the sounds of music played from the heart, he’s been supporting

everyone around him his entire life.

For more information on the Huntington Erie Community Band, please visit their Facebook page or go to www.erieband.org