The 2020 class will be the last Lady Eagles team to play on the historic hard court before moving to their new home.

By The Dens Mike Rice

Lickey opened the nights scoring and gave the Lady Eagles an early 2- 0 lead, just twenty-four seconds into the game. 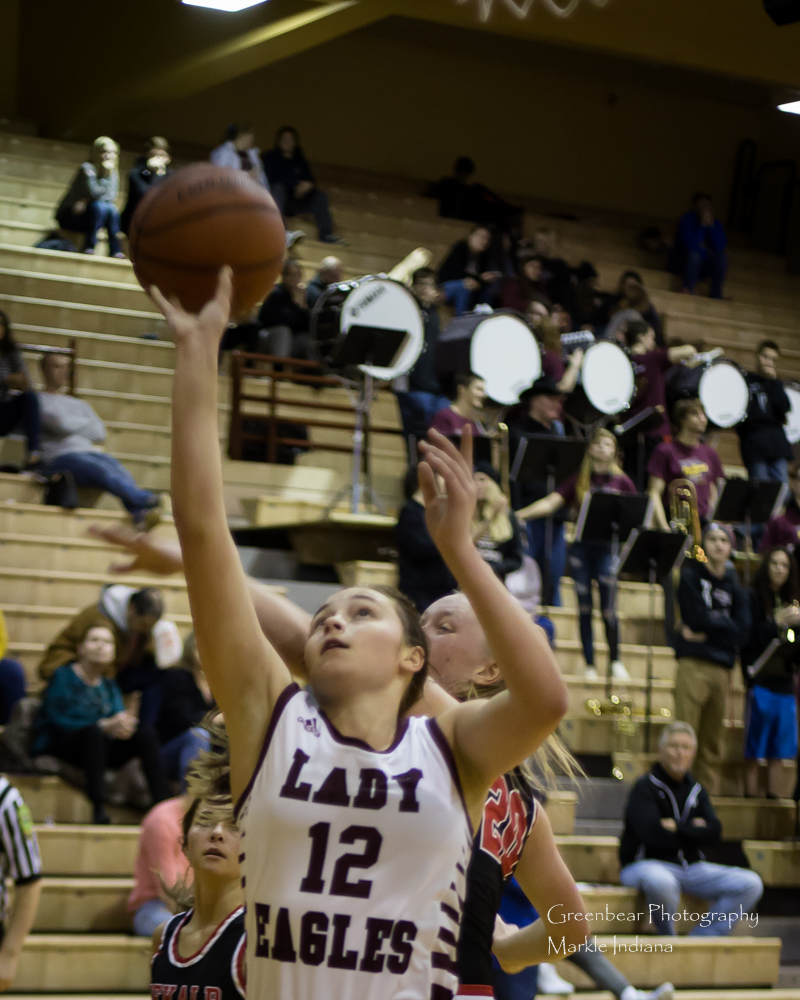 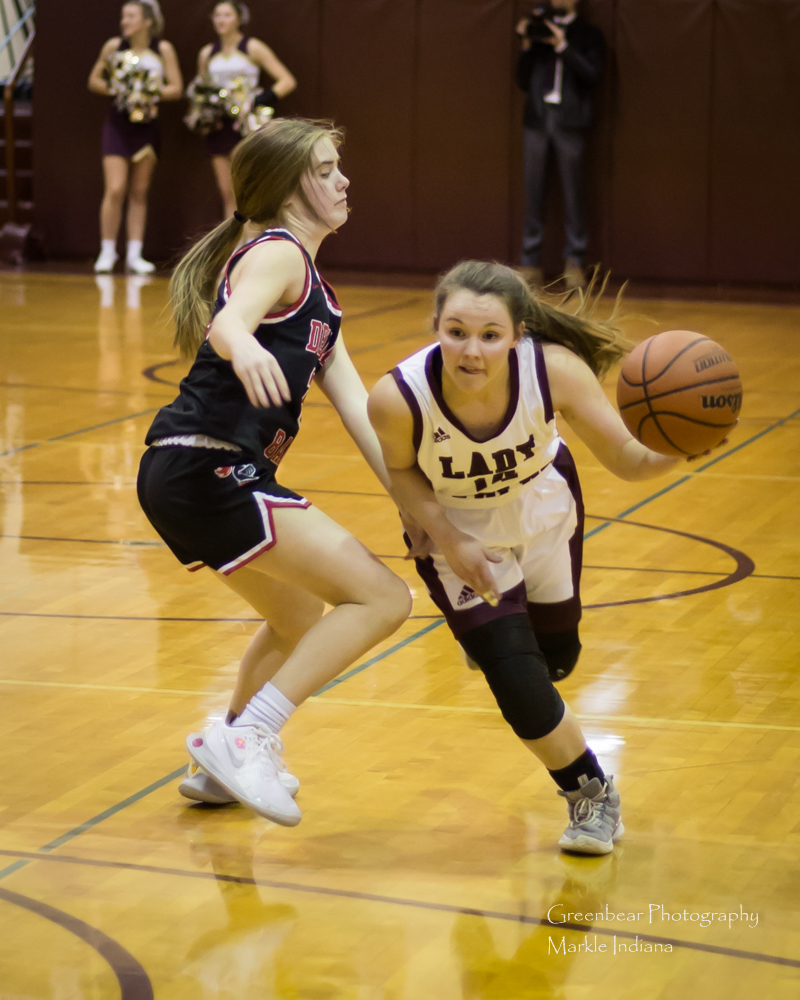 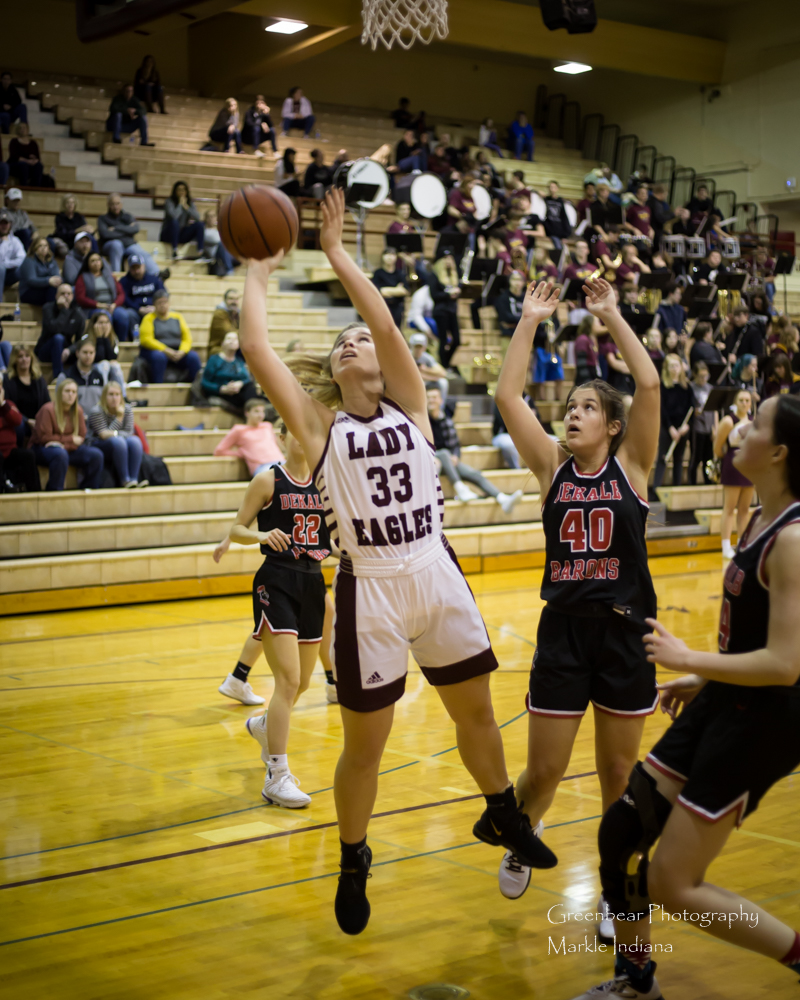 A steal and basket from Mabie, followed by baskets from Lickey and Fry extended the lead to 8-0.

An “and 1” and a three ball from Shearer pushed the led to 14-0 and prompted DeKalb to call their second timeout of the game at the quarter’s 3:35 mark.

Five consecutive points from Hayley Urban sent the quarter to a close with the hosts ahead 19-0.

DeKalb broke through for their first score, ending a scoreless stretch of over eight minutes, as the second period began and looked to find some sort of flow on the offensive end.

Columbia City responded by maintaining possession for the next minute and four seconds, getting five shots, before a three pointer from Schrader.

As the period reached its halfway point, a Lickey free throw nudged the score to 32-6 and placed the Lady Eagles firmly in the driver’s seat.

Columbia City’s offense slowed as the second half opened. While the Lady Eagles mustered just 6 points in the period, DeKalb erupted for 14.

That outburst pulled the Lady Barons to within 19 points, 42-23.

The Lady Eagles righted the ship in the 4th quarter, embarking on a 13-0 run over the first four and a half minutes.

That last show if dominance ran their lead to thirty-two points, where it remained, as Columbia City secured a 60-28 victory over DeKalb.

Columbia City was victorious in the JV game, as well, 42-13

Prior to, as well as during Friday night’s game, a fundraiser for Mission 25, was held. The event was sponsored by Eagles In Action

Mission 25 is dedicated to providing prevention, transition and restoration for the homeless of Whitley County.

On top of collecting needed materials, such as plates, cups, toiletries and other necessities for day to day living, the drive netted nearly ten thousand dollars in monetary donations.

If you would like more information about Mission 25, please visit https://www.mission25cc.org/

The Daughter of Todd Fry and Sunshine Eckert she participated in cross country, soccer, track & field and basketball. Gabby is also a member of the National Honor Society and the Columbia City Youth Council.

Gabby’s favorite memory in basketball is defeating Norwell this season. After graduation she plans to attend IUPUI to study Dental Hygiene.

Is the daughter of Brent and Kim Lickey, her sports include softball and basketball.

Her clubs include Circle of Friends, National Honor Society and FCCLA. Accomplishments include being a three-year varsity basketball and softball athlete, along with being named all-conference in softball. Brayden's favorite memory is going to West Lafayette in rooming with Carly, Haley and Madison having to popcorn kernels out of the sink, clean a Hot Pocket that exploded, and Haley losing her Klondike Bar in her bed. After graduation Brayden plans on continuing for softball career at Eastern Illinois while majoring in chemistry with focus on pre med.

Carly is the daughter of Chris and Twyla Mabie, her athletic teams include golf and basketball. She’s a member of the National Honor Society, Student Council and the Key club.

Her accomplishments include, Most assist in basketball 2017, and 2018 best free throw % in 2017, defensive award in 2017, most steals in 2018, the Tina Parker award in 2017, 2nd team all conference in basketball in 2017. First team all conference 2018, the Mental Attitude award in golf for 2018, the Tina Parker Award for golf in 2018. Academic All State for golf and Academic All State honorable mention in golf and the Wedge Leadership award in 2019. Carly’s favorite memory is from the summer shootout in West Lafayette when she stayed in a room with Hayley, Brayden and Madison . After Graduation Carly plans to attend the University of Indianapolis for a degree in Exercise Science and pursue a career in Physical Therapy.

Grace is the daughter of Rex and Holly Schrader; her athletic teams include track, basketball and is a member of the FFA. Accomplishments include honorable mention all-conference in basketball, 2nd team all-conference in basketball, state and national champion in life Grace's favorite memory is doing an escape room where Olivia and her were trying to figure out a password on a lock, originally they use Grace’s birthday but little did they know they only had two tries,,, it turned out okay and the girls made it out. After graduation rate plans to attend Grace College and major in Ag Business

Olivia is the daughter of Chad and Amy Shearer; her athletic teams include soccer and basketball. She belongs to the National Honor Society and Circle of Friends. Her accomplishments include 1st team all conference in basketball in 2018 and 2019. National History Day winner at the state level, Daughters of the American Revolution County Representative and the Academic Honor Roll. Olivia’s favorite memory is having practice on Halloween and waiting to see what Coach Zorger’s costume was going to be when she came to practice. After graduation Olivia plans to attend Indiana University to major in English.